What are bonds, and why should I care? 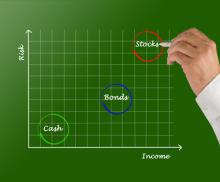 Bonds are generally considered the unsexy area of the investment world, which is really saying something. I mean, how many times have you been at a cocktail party or standing around the water cooler at work when someone says, "Man, my bond portfolio is HOT! My return was over 1% last quarter!"? I would guess, never. That's not to say that bonds aren't fascinating investments with complexities and nuances that can take years to completely understand. However, I'm not here to educate you to the level where you can hold your own in a conversation with Bill Gross. [If you've never heard of Bill Gross, he's the rock star of the bond world.] Instead, I'm going to give you the quick and dirty of what bonds are and how they can help you.

What is a bond?

Bonds are essentially loans between the borrower/issuer and the lender/investor. When a company wants to borrow money in the marketplace they will issue a bond. Each bond is generally issued in $1,000 increments (aka "par"). They'll decide how long they want to borrow the money (aka "maturity") and the interest rate they'll be willing to pay (aka "coupon"). Most of the time, the interest the issuer owes the investor will be paid every six months.

So, what does this look like? Say the Acme Company (I've always been a fan of the Road Runner cartoon) needs to borrow $1 million to build a new plant, but wants to borrow it from the marketplace instead of the bank. They figure they will be able to pay back the $1 million in 20 years and they're willing to pay a 10% interest rate on the loan.

Can you ever lose money by investing in a bond?

Yes. If Acme goes bankrupt there's a chance the investors won't get all/any of their money back. [Bondholders, however, stand in line before shareholders when it comes to closing down a bankrupt company.]

Another way you can lose money (or make more money) by investing in a bond is by selling it before maturity (20 years in our example). You can memorize the following statement...

"There is an inverse relationship between the direction of interest rates and a bond's price."

or learn what it means by following my explanation, below.

Let's assume in our example that there's runaway inflation and interest rates rise. Investors can now earn a 13% interest rate on any new bonds issued. Why would they want to buy my bond for $1,000 when it only pays them 10%? The answer is they wouldn't...unless I put it on "sale" and offer it at a discount. They may pay $900 for my bond that will pay them lower coupon payments every six months than a new bond would give them, but will still pay them the full $1,000 when the bond matures.

Conversely, let's assume that interest rates go down after I buy my bond and new bonds are being issued with a 7% coupon rate. My 10% coupon looks pretty good and I can charge more for it in the open marketplace. Now, I can find investors willing to pay $1,100 for my bond even though they'll only get paid back $1,000 when the bond matures.

The bottom line is:

Keep a bond until it matures and you'll know exactly how much you'll earn. Sell a bond before maturity and your bond's return will vary with the market.

Why should I own bonds in my portfolio?

Bonds are a stabilizing force in your investment portfolio. As you learned above, if you hold a bond until its maturity, you'll know exactly what your return will be. Of course, you have to pay for this stability, and that payment comes in the form of lower returns. Sure, you may get lucky and see falling interest rates like we saw over the first 10 years of the millennia when bonds outperformed stocks. [The average yearly return for the Barclays US Aggregate Bond index was 6.38%, while the average return of the S&P 500 Index was only 2.46%.] However, it is much more common for stocks to outperform bonds over the long-term, by a large margin.

How much of my portfolio should be invested in bonds?

Unfortunately, there's no easy answer to this questions. Some people advocate holding the same percent in bonds and cash as your age (i.e. 40 years old= 40% bonds+cash, 80 years old=80% bonds+cash). As much as I love bonds, I feel that formula will most likely lead to you owning more bonds than you should. Instead, your friendly neighborhood Certified Financial Planner™ will be able to help determine the perfect bond allocation tailored specifically for you.